A Story about the Transformational Power of Soy niña, soy importante 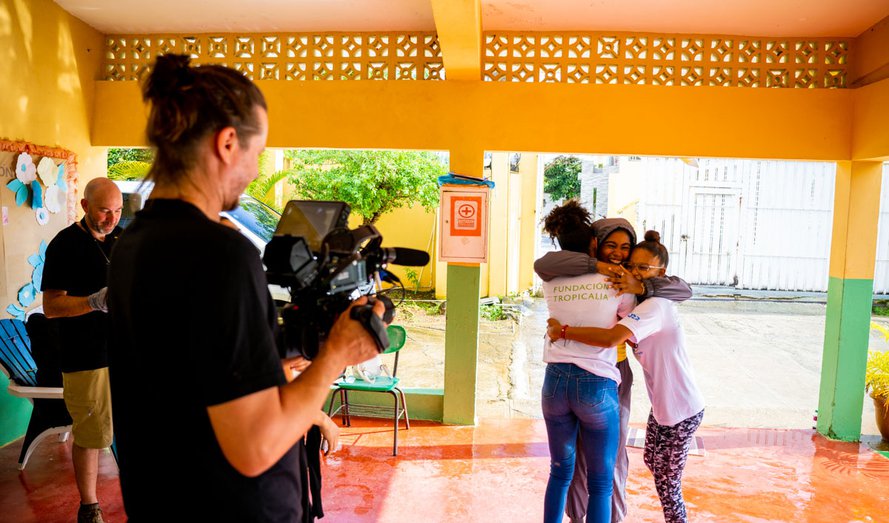 Fundación Tropicalia a non-profit founded by Cisneros in 2008, coordinates the internationally acclaimed Soy niña, soy importante initiative in the Dominican Republic, which is now part of the Global Wellness Institute’s new digital film series, “In Pursuit of Wellness: The art & science of living well.” The series explores the importance of wellness in every aspect of life, covering 17 inspirational stories of wellbeing from across the globe. One of the stories, “Taking Charge” features a Dominican girl living in a rural community whose image of herself transforms as a result of participating in Soy niña, soy importante.

Now in its 10th year, Soy niña, soy importante works with at-risk girls providing them the support and tools they need to stave off early pregnancy, gender-based violence and low self-esteem in the isolated coastal town of Miches in northeast Dominican Republic. The program’s overarching mission is to protect the girls’ childhoods, guide them in making timely life choices, and educate them and their community regarding their rights.

“As we worked on various community development programs in Miches, we witnessed the great challenges that both boys and girls face when growing up with such scarcity. In these vulnerable circumstances, unfortunately girls are exposed to greater risks, oftentimes falling into marriage and pregnancy way too early, stifling their ability to finish school or protect their wellbeing, since on average a girl between 11 and 18 years old becomes pregnant with a man more than 10 years her senior,” Adriana Cisneros, CEO of Cisneros, said. “We were determined to address this inequality at its core.”

“It starts with teaching girls their rights and the important role they play in society … knowledge they take to their families and their communities, spreading like wildfire. Our work has shown that the girls most likely to break their family’s generational poverty cycle and carve out a different path are those who feel confident in who they are, and feel supported. With their self-esteem intact, they can map out their short- and medium-term goals, and are better equipped to manage the risks they face daily,” says Katherine Duran, Director of Soy niña, soy importante.

In the film, Rosielys Reynoso, a 14-year-old girl, former Soy niña, soy importante camper and junior volunteer, talks about how the program gave her fresh insight into the trajectory of her life. She is now a role model for younger girls in her community.

“Before, I was not motivated,” says Rosi. “Soy niña, soy importante influenced me in many ways.”

Since completing the program, Rosi has a very different vision of her future, one that includes college and having children only after graduating. Rosi’s mother fully supports her daughter and the program.

Fundación Tropicalia provides this platform for changing the world, one girl at a time, by teaching girls how to defend their rights, achieve their dreams, and develop their abilities. Since 2013, Soy niña, soy importante has helped more than 1,300 girls.

Every girl in Miches has access free of charge to the programs of Soy niña, soy importante, including:

● Summer Day Camp: the week-long camps for ages 9-12 aim to break the poverty cycle by challenging girls to believe in themselves and to dream big.

● SNSI in a Box: delivers the transformational messaging of Soy niña, soy importante directly to girls’ homes through themed boxes containing didactic materials, snacks and surprises to encourage the participation of the whole family.

To support the mission of SNSI, Fundación Tropicalia also spearheads communications campaigns to raise awareness regarding the condition of the Dominican girl and woman, and encourages civic participation in order to actively contribute to the elimination of gender violence and child abuse, and promote more inclusive communities.

“In Pursuit of Wellness: The art & science of living well” is presented by the Global Wellness Institute and produced by BBC StoryWorks Commercial Productions. The film is available to view here: www.inpursuitofwellnessseries.com. Join the conversation on social media via the #InPursuitOfWellness hashtag.

REDDOM and Fundación Tropicalia have launched an innovative project that seeks to strengthen and diversify agriculture in the municipality of Miches, located in the province of El Seibo.

Integration and Sports at the Tropicalia Cup

"The Catcher" stadium is the pride of the community and the home to one of the town's most moving celebrations: Tropicalia Baseball Cup.